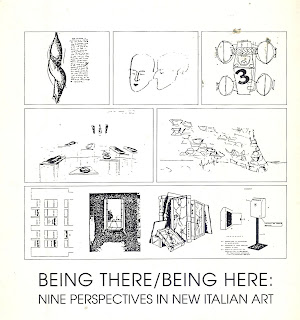 For the three founders of Gruppo di Piombino, named for the Tuscan town in witch they are based, enviroment is inseparable from the similarly innocuos, normally unnoticed objects that they employ. For these artists, however, objects are merely ploys, sherewdly selected to lure unsuspecting spectators into interaction, and thereby, illuminate human behavior.
In Rome, Pietroiusti, who joined the group in 1987, takes a different tack. A trained psychiatrist who perceives behavior from the scientific perspective, rather than use objects, he prefers to recreate the situations he construes by means of photograph. As the group's link to art worlds beyond Piombino's confines, a partecipant in the Roman scene and a frequent visitor to America, Pietroiusti garners information to supplement his fellow artist's exposure to magazines and objects in exibhitions to which they have access. Thus, the work of Dan Graham, Vito Acconci and Douglas Heubler has contributed to their direction. The impact of these Conceptualists on Pietroiusti, most notably Acconci's use of photographs as documentation and Heubler's rejection of the object, has been a more formidable one.
Working in Piombino, the others prize their isolation and distance from the complexities of a major urban center as essential to the realization of their projects to objectify human activity in their art. The traces of pedestrian – in both sense of the word - travels marks Falci's beds of grass. Modica's shuttered glass, fractured by accident or “test”, and messages on Fontana's telephones retrieved from the further reaches of the urban community are further data of their researches. Pietroiusti hugely blown-up photographs render the implicit and the obscure in lucid and coherent visual terms. They document, for exemple, a “test” of 40 people undertaken in a studio that belonged to Lucio Fontana. Created by attaching silhouettes of the subjects made from slides to photographs of the space in which they chose to wait for thirty minutes, they invite viewers to probe aesthetic phenomena in terms of more mondane experiences.
Although the group deems work successful only if it is charged with an “aura” that attests to its formal value, the capturing of reality holds primacy in their intentions. That stipulation supports their insistence on identifying their work not as conceptualist but as realist.
(da Merle Schipper, Transatlantic Crossing, testo in catalogo)

In presenting an exibition by Falci, Fontana, Modica and Pietroiusti in 1988, Domenico Nardone, the critic who is considered their theoretician, felt it necessary troughout his entire essay to insist upon the differences that separate the political art of the 1970s from the political practice that informs the works and actions of the so-called Piombino Group. In fact, the unifying element in the works of these four artists has been the more or less unsuspecting involvement of the public in the elaboration of their pieces. “Unfortunately, this expression”, writes Nardone, "recalls the art of agitation and propaganda - an art which, recognizing its own role as a superstructure with respect to the trasformation of reality, coherently places itself at the service of an ideology and an organization in witch it recognized a role as structure. The art of 1970s in Europe was strongly informed by this kind of theoretical stance. (…) The 'involvement' implied by the works of these four artists, instead, seems to me to be of an entirely different nature (…) On previous occasions i have definited this as a transition from a political art to an art made in a political way (…) witch seems clarify how far it is from any utopian plan to 'recostruct the universe' - this art no longer envisions the realization of a futuristic ideal cities or millenarian final solutions”.
In short, these artists have stripped politics of any ideological baggage and returned to its philological parameters: i.e., a system of relationships among members of the public. From this system are born, to a great extent through will and predetermination, but in part also by chance, the works of these artists: Falci's floors, with the footsteps of anonymous passersby; Fontana's clay forms shaped by the impressions of the hands of supermarket patrons; Modica's machines, which record the effects of automatic human actions; and Pietroiusti's gigantic objects, laden with traces and signs left by casual everyday gestures. There is no pretence of universality in any of this, but if anything an attempt to observe minimal mechanisms, an attitude similar to that of a scientist or entomologist poised to record a series of phenomena and actions.
This is an attitude shared by an entire generations, although on the young italian art scene the Piombino Group represents a unique exemple of artists united by a common resolve, a common set of poetics.
(da Alessandra Mammì, Reflections on the New Italian Art, testo in catalogo)